In December (2013) I got word from COWBOYS & INDIANS magazine that my image "A Virgin Autumn" had been selected for the face of the annual collectors photography issue. One of the most popular issues through the year, it was available at newsstands around the country through February, 2014.

The issue presented dozens of superb images in five different categories: Cowboy, Native, Equine, Wildlife, and Landscape. Winners were named in each, plus one over-all Best.  In all, more than 900 photographers submitted nearly 1,400 entries for the year's competition.

My cover shot, "A Virgin Autumn," was taken mid-afternoon, November 3, 2012, in Utah's magnificent Zion National Park. The view is looking downstream above the Virgin River toward the mountain named "The Watchman."  My credit line citation appears quite modestly along the crease on page 16.

Winning the cover position is important to me for several reasons: the validation of my work, the recognition and exposure that should bring more "eyes" to what I do, and the welcomed monetary prize, as well.

Industry analysts estimate each issue of the Western life style magazine is seen by nearly a million readers. 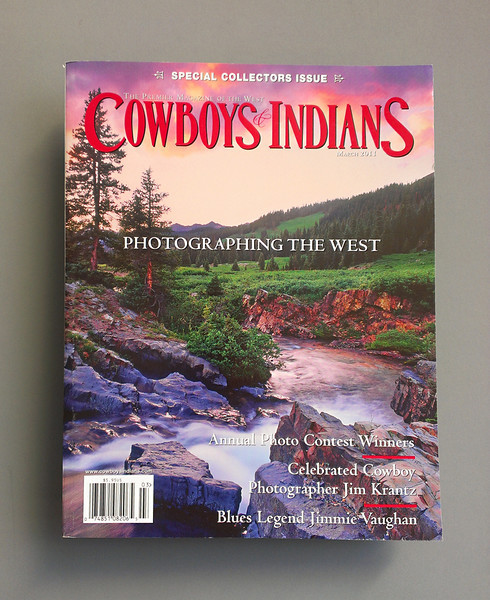 The fact is, this honor also came to me in February, 2011.  I had submitted a scene for their popular annual contest in October the previous year but, when no word came about their decisions, I assumed I had fired a blank.

Not so.  Walking past the magazine rack at my neighborhood Safeway grocery store I was startled to see MY image on the cover of the annual collectors' issue of COWBOYS & INDIANS!

At that time there was no cash award for the cover position, so I had not received notice of their selection. I was pleased, to be sure, and "made do" with the exposure.  [The cover selection prize started the next year.]

Thanks to the notoriety, I sold several framed prints of "Twilight Falls."    This cover design cropped a vertical segment from my wider landscape (horizontal) image. You can see the full image in my SPRING and SUMMER portfolio.

Spanning the past 14-15 years I've had several photographs awarded prizes.  Most people who submit their work for judging do so to challenge themselves to strive for a higher level of quality, one that is recognized by the event's expert authority.

This year I have two black/white pieces (among 66 chosen) in a strong local exhibition at the Littleton Historical Museum's 52nd Annual "Eye of the Camera" show, which runs through March 25.  Admission is free.  Check the museum's webpage for hours.

I've had two "Best in Show" citations from Littleton's "Eye of the Camera" competition, now in its half-century + two round.  In 2003 I took the honor for a Black and White landscape.  More recently, the prize was for a color seascape.

The City of Lonetree, a Denver suburb, sponsors an excellent competition annually.  In 2008 my shot of a Utah cataract near Sundance won "Best in Show" Color.

Last, dating back to around 2000 to 2002 two of my shots earned Best Color Landscape honors in the Louisville Art Association's National Juried Photography Contest.

RECOGNITION FOR THE GALLERY

From late 2003 to early 2012 I had an art gallery in Colorado, in Littleton and Centennial, that featured my work, along with a selection of quality gift and decor items.

In 2007 a national business promotion enterprise arrived in Denver and teamed with the city's ABC TV network affiliate, and people around the metro area saw the first public recognition of good, popular businesses making it to "The A*List."

Every summer for about six or eight weeks, the public engaged in online voting for their favorite shops, restaurants, service providers, etc., in dozens of categories. After you registered your business on the A*List site your customers and fans could cast an online vote for you.

The first year this was done I was flattered to find, when the dust had settled, I'd reached the second position for Best Denver Art Gallery. To be sure, this was a "people's choice" honor, but still . . .

It got more interesting the next season. Starting in 2008, out of some 70-80 candidates in my category, we reached the top position. In all, the Larry Johnson Gallery collected four consecutive annual First Place plaques. I closed the gallery in 2012 before that summer's voting got underway.

Denver is fortunate to have many outstanding galleries, several finer and more credible than mine was. However, the recognition was gratifying, and a credit to the customers and friends who supported mine.  You can see a view of it in the SALE  ITEMS portfolio: check the Tab to the right of center of the Navigation Bar on the HOME page. 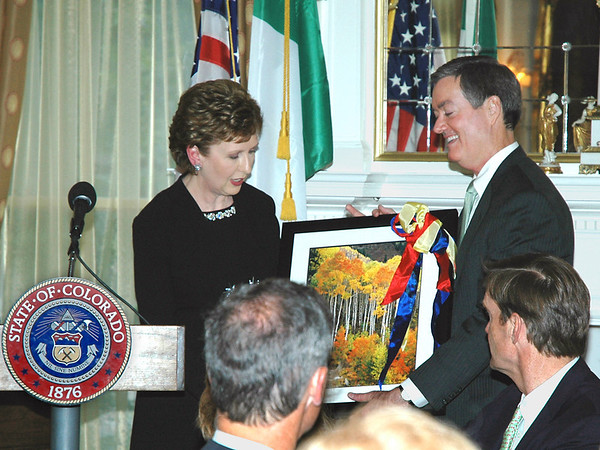 During the tenure of former Governor Bill Owens (Colorado, 1999 - 2007), four of my landscape pictures were purchased by his staff for gift exchanges with foreign dignitaries.

Pictured, left, you see Ireland's President Mary McAleese accepting a framed scene at the concluding dinner for a two-day series of meetings centered on trade.

Another gifting event came at the end of the visit of Governor Saito of Japan's Yamagata Prefecture, Colorado's sister state.  A framed picture of a mountain scene taken south of Breckenridge was presented at the Colorado official Governor's Mansion, July 2006.

Later in the year, Governor Owens traveled to the Middle East for talks, and at one of the state events, two framed pieces were given to King Abdullah II of Jordan, and one of his sons. 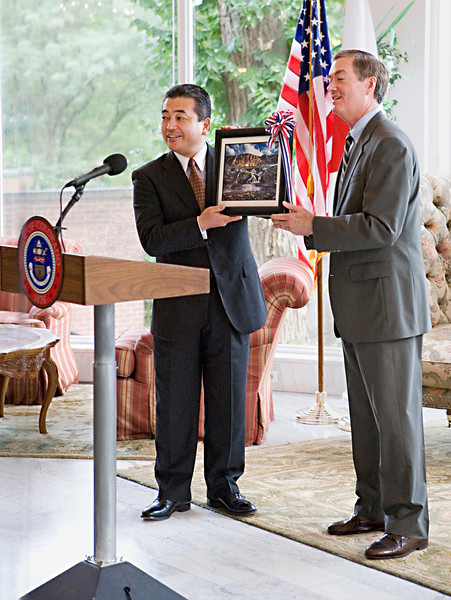